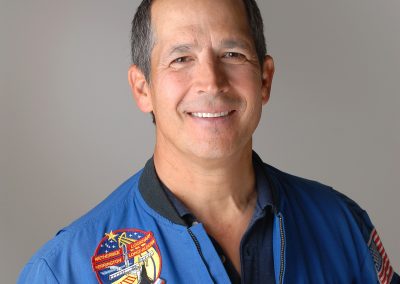 John B. Herrington, Ph.D. (Chickasaw) was the first member of a federally recognized tribe to travel to space. Like many children in the 1960s, he dreamed of becoming an astronaut. Although Herrington held tight to his goal of flying in space, his path to the  astronaut  corps  was far from what one might expect. A lack of motivation as a  freshman  in  college,  his  interest in rock climbing instead captured his imagination and he  was  subsequently  suspended from college with a 1.72 GPA.

Using his expertise as a rock climber, Herrington found work as a member of a survey crew in the Colorado mountains. Exposed to the practical application of real world mathematics, he found the passion for  learning  that  had  eluded  him.  Following  the  advice  of  the  lead  project engineer, Herrington returned to college and graduated with an engineering degree.    He was also fortunate to meet a retired Navy captain who encouraged him to apply to the    Navy, which led to a 22-year career as a Naval Aviator, test pilot, and astronaut.

His historic mission to the International Space Station (ISS) was the culmination of years of experience and training with men and women with  diverse  cultural  and  technical backgrounds, and provided Herrington with a unique perspective that he enjoys sharing with audiences worldwide. “From lift off to completing three space walks, mission STS-113  was  more exciting and challenging than I could have imagined.” But Herrington’s work didn’t stop when he returned to earth. After a successful career as an astronaut, he ventured into the commercial space arena and eventually found a new passion.

Following a 4,300-mile bicycle ride across the United States,  Herrington  returned  to  university and earned a doctorate in Education. With humility and humor, John shares his stories of challenge, leadership, motivation, and mentorship with diverse  audiences  of  all  ages and occupations. His multimedia presentations inspire and entertain, and challenge people to seek out the best in themselves and in service to others.

Anyone who is interested in trying to find a new way to inspire themselves  or  their communities will find Commander Herrington’s stories of struggle, mentorship, and  persistence a welcome reminder that our dreams and goals are  gifts  to  pursue  and  enjoy  with the world.