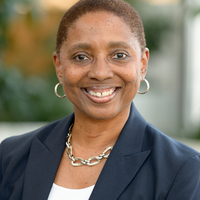 Biography
Valerie Taylor is the Director of the Mathematics and Computer Science Division and a Distinguished Fellow at Argonne National Laboratory. Her research is in the area of high-performance computing, with a focus on performance analysis, modeling and tuning of parallel, scientific applications. Prior to joining Argonne, she was the Senior Associate Dean of Academic Affairs in the College of Engineering and a Regents Professor and the Royce E. Wisenbaker Professor in the Department of Computer Science and Engineering at Texas A&M University. In 2003, she joined Texas A&M University as the Department Head of CSE, where she remained in that position until 2011. Prior to joining Texas A&M, Valerie Taylor was a member of the faculty in the EECS Department at Northwestern University for eleven years. She is also the Executive Director of the Center for Minorities and People with Disabilities in IT (CMD-IT).

Valerie Taylor is an IEEE Fellow, ACM Fellow, and has received numerous awards for distinguished research and leadership, including the 2001 IEEE Harriet B. Rigas Award for a woman with significant contributions in engineering education; the 2002 Outstanding Young Engineering Alumni from the University of California at Berkeley; the 2002 CRA Nico Habermann Award for increasing the diversity in computing; the 2005 Tapia Achievement Award for Scientific Scholarship, Civic Science, and Diversifying Computing; the 2018 Outstanding Electrical and Computer Engineering Award from Purdue University; and the 2020 Distinguished Alumni Award in Electrical Engineering from the University of California, Berkeley. Valerie E. Taylor earned her B.S. in ECE and M.S. in Computer Engineering from Purdue University in 1985 and 1986, respectively, and a Ph.D. in EECS from the University of California, Berkeley, in 1991.
Presentations
Academic Panels and Workshops
Panel
Increasing Diversity in Doctoral Programs: Insights from the Trenches

Academic
Birds of a Feather
The Importance of Having a Voice: Black Women's Perspectives