Location
DescriptionAbstract: With humor and humility, Dr. Herrington shares his remarkable journey to the astronaut corps and the International Space Station. As a freshman in college his interests were in the mountains of Colorado, rather than the classroom. Suspended for low grades, he utilized the skills he has acquired as a rock climber and became a member of a survey crew in Glenwood Canyon, CO. His fascination with the work and seeing mathematics in practice for the first time, he followed the advice of his mentors and returned to school to pursue a degree in engineering. As a senior in college he was fortunate to become the calculus tutor for a retired Navy Captain who flew Dauntless dive bombers in World War II. Following his advice he joined the Navy in 1983 and completed a 22 year career in 2005. Mentors and motivation were the key to his success and he encourages others to find their passion in life and pursue their dreams through hard work, determination, and the advice of those that have led the way before.
Presenter 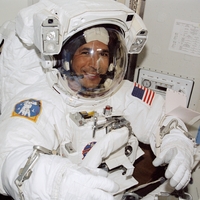